Soda and its applications

Soda and its applications

Soda or sodium hydroxide is a highly reactive chemical known as caustic soda, solid flake soda, and rarely industrial degreaser soda. Flake soda is one of the main products of the petrochemical industry, and has become a major component in the production of a variety of products in the downstream industry. It is an ionic compound with the formula NaOH consisting of sodium cations Na+ and hydroxide anions OH–. The chemical at the outlet of refineries is a very corrosive fluid with strong environment moisture absorption property. Consequently, this liquid is converted to a solid commercial product. Purity of the commercially available flake soda should be about 98% to comply with international standards.

Sodium hydroxide or caustic soda, known as flake soda, is produced industrially in the form of white solid flakes. The corrosive feature of this product is the main reason for its production in the solid form. Sodium hydroxide is a strong, highly reactive alkali and hazardous in the liquid state. Therefore, it is converted to a solid form to be used in various industries. 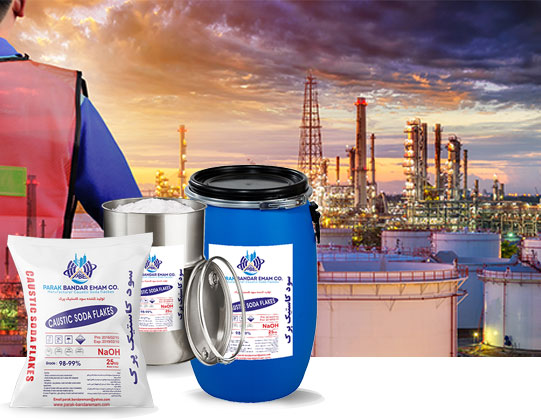 The production of caustic soda is based on salt water hydrolysis, in which the sodium chloride solution is analyzed through electrolysis, resulting in the production of sodium hydroxide solution (caustic soda), chlorine, and hydrogen. In this process, about 1126 kg of caustic soda is produced per 1000 kg of chlorine and 28 kg of hydrogen. There are various methods for producing liquid soda and flake soda, of which three general methods can be mentioned:

The flake soda of this company is provided in double-layer polyethylene and polypropylene bags for both domestic and foreign markets, including:

The Bandar Emam Parak Company launched its caustic soda activity in 2001 by running two production lines; however, according to the employees’ efforts and in line with the developmental goals of the management, the company added 4 other production lines in 2003, enabling a total production capacity of 100 tons of solid caustic soda per day …